Showing posts from April, 2012
Show all

POLITICS - NOT FOR CHRISTIANS 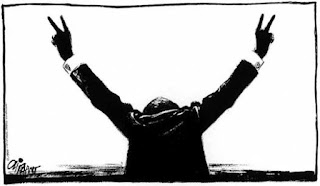 From Scriptures such as Daniel and Revelation, we can see where this world's politics are headed. All roads lead to the Antichrist, the one world government under the man of sin, the beast. The fact that God permits certain forms of government does not mean that He prefers them. The world empires are called "beasts" in God's Word. Yes, even democracy is a beast. The kingdom of God is not a democracy, but a benign monarchy. And through faith in Christ one can come into the kingdom of God's dear Son (Colossians 1:15). This is what should occupy Christians, rather than politics. No one says it better than William MacDonald, in his book ONE DAY AT A TIME, the reading for January 18th, “My kingdom is not of this world: if my kingdom were of this world, then would my servants fight…” (John 18:36) The fact that Christ’s Kingdom is not of this world is enough to keep me out of the world’s politics. If I participate in politics, then I am casting a vote of confid
Read more

The Book Our Mother's Read

We search the world for truth; we cull The good, the pure, the beautiful, From graven stone and written scroll. And all old flower-fields of the soul; And, weary seekers of the best, We come back laden from the quest, To find that all the sages said Is in the Book our mothers read. --John Greenleaf Whittier But today's mother's are better known for cell phones and handing off their children so they can pursue their careers. I wonder, what legacy, what firm foundation, what fond memories will these poor children have when they are older? If it is to be "the Book our mothers read", then there are a lot of mothers who need to put down the phone, turn off the T.V. and start reading the Book!
Read more 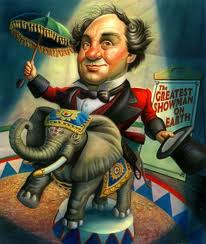 P. T. Barnum and Harold Camping "They keep stumping their toes and delighting their foes, these latter days stunt men (and women)." Does this refer to men like Harold Camping, or those who believe his prophecies and follow him? Like insects toward a lamp, these people seem to have a fatal attraction, they can't stay away, and they burn themselves by making false prophecies. The Lord said that no man knows the day or hour. And they all seem determined to prove Him wrong! The Adventists did it with Miller and White, the Jehovah's witnesses did it with Russel and others. Edgar Whisenant published a book whose title was "88 reasons why the rapture will be in 1988." They sent out 300,000 copies. But it was wrong. People I knew sent me the book and when I wrote them at the beginning of 1989 to point out their error, they broke all contact with me. But my point is, what did Harold Camping learn from all those false predictions? Absolutely nothing. H
Read more 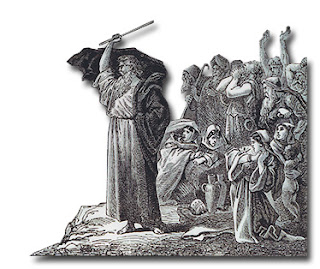 The following article is presented as a reply to those who abandon New Testament assemblies of God's people and join denominational churches, citing a variety of reasons that usually include some fo rm of complain t. Complainers (Numbers 11:1) CLARK McCLELLAND, WESTBROOK "All sorts of excuses are given for turning from God’s order"          The experiences of Israel during the testing times in the wilderness brought out much that was displeasing to God, (1 Cor. 10:3). The same chapter brings out the fact that Israel's failures are recorded for our admonition and our profit. We are warned against repeating the same sins.         Numbers is the wilderness book. A careful consideration of chapters 1-10 will reveal that God gave explicit instructions for the gathering and journeying of His redeemed people. Nothing was left to man's arrangements. All was ordered by God. Surely all would agree that such instructions, coming from a God of perfect love
Read more
More posts