July 07, 2020
Biblical Christians believe that all lives matter, because God created mankind, not one race or another, but the whole human race. No race or ethnic group is better than another. And yet, racism exists on every continent and in every ethnic group.
Other forms of discrimination are commonly accepted. For example, abortion is freely practiced and government-subsidized in many countries. Do "Infant lives matter"?  Some are proposing euthanasia for older people who are no longer "productive members of society" (whatever that means!). Do older lives matter? Many other examples could be given, except among Christians.
But consider how real Christians respond to mistreatment. We know that over the ages there have been multitudes of Christian martyrs -- saints who were cruelly executed for their faith. Yet Christians never start a "Christian lives matter" campaign, nor take to the streets to destroy property and confront the authorities. They do not seek government compensation. They wait on God's judgment.
The apostle Peter writes, "For what glory is it, if, when ye be buffeted for your faults, ye shall take it patiently? but if, when ye do well, and suffer for it, ye take it patiently, this is acceptable with God. For even hereunto were ye called: because Christ also suffered for us, leaving us an example, that ye should follow his steps: Who did no sin, neither was guile found in his mouth: Who, when he was reviled, reviled not again; when he suffered, he threatened not; but committed himself to him that judgeth righteously" (1 Pet. 2:20-23).
Unbelievers and those who falsely profess to be Christians do not take mistreatment patiently. Their motto is more aligned with the motto on the Gadsen flag: 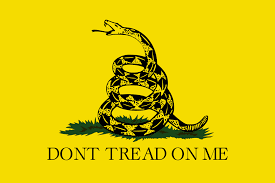 The Christ-less, the unconverted, believe in fighting back, using violence, venting anger and hatred against whoever they perceive to hate them. How different the words of Christ to His followers:
"If the world hate you, ye know that it hated me before it hated you. If ye were of the world, the world would love his own: but because ye are not of the world, but I have chosen you out of the world, therefore the world hateth you" (John 15:18-19). Christians have been hated and mistreated longer than many other groups. Even by churches, or have you forgotten the Inquisition, supported by governments and the Catholic Church, that persecuted Christians and Jews! It is wrong to abuse power and authority to persecute and mistreat others, not just now, but in every age.  But the Christian reaction is different from that of the world.
Let's face it, injustice, social and otherwise, is as old as humanity. Don't misunderstand me. That doesn't make it right. There is no whitewashing it, no excusing it, anywhere, by anyone at anytime. But there it is, and protests and violence and legislation will not eliminate it because it is in every heart of every race. The solution is in the gospel, and people today don't want the gospel. And how is that working out?
But Christians know that judgment day is coming. God has promised to judge every person according to his works, and even secret sins will come to light and be punished, "In the day when God shall judge the secrets of men by Jesus Christ according to my gospel" (Romans 2:16). And after judgment day comes a better day, a new world in which righteousness dwells. Read the Bible and you'll see.
But be very clear about this:  paying back, taking vengeance, rioting, is never justified just because we have suffered injustice. Even the world knows this, and says, "two wrongs don't make a right." Remember, Romans 12:19 instructs Christians,  "Dearly beloved, avenge not yourselves, but rather give place unto wrath: for it is written, Vengeance is mine; I will repay, saith the Lord."  No one has permission from God to avenge himself. If you do it, you are wrong regardless of your race or cause.
Christians are not blind to injustice, and they do care. But they know that more injustice -- wrecking property -- fighting -- looting -- are not justified. They are the carnal, sinful response of those who do not believe, pray or wait on the Lord. Judgment day will come for these also.
Romans 12:17 says, "Recompense to no man evil for evil." Ephesians 4:31 teaches Christians,  "Let all bitterness, and wrath, and anger, and clamour, and evil speaking, be put away from you, with all malice."  We are taught to love those who hate us and to pray for those who misuse us. We are taught to be subject to the government, and obedient to masters  "not only to the good and gentle, but also to the froward" (1 Pet. 2:18).
However, we live in a world that is corrupt and contaminated. People have turned their backs on God and His Word. Now they are full of self-love and self-importance and a hundred other hyphenated sins. "My rights" is a modern obsession that may be worse than even the bubonic plague. The apostle Paul warned that these days would come, and now they are here. "This know also, that in the last days perilous times shall come. For men shall be lovers of their own selves, covetous, boasters, proud, blasphemers, disobedient to parents, unthankful, unholy,  without natural affection, trucebreakers, false accusers, incontinent, fierce, despisers of those that are good, traitors, heady, highminded, lovers of pleasures more than lovers of God" (2 Timothy 3:1-4). Welcome to the 21st century.
But remember, judgment is coming, from heaven!
The Christian is not his own, he has been bought with a price, the precious blood of Christ. Therefore he his not free to do as he pleases or to follow the crowd. He has a Lord who commands, "Glorify God in your body and in your spirit which are God's" (1 Corinthians 6:19-20).
"But the end of all things is at hand: be ye therefore sober, and watch unto prayer.  And above all things have fervent charity among yourselves: for charity shall cover the multitude of sins" (1 Peter 4:7-8).
Of course, those who are not born again by faith in the Lord Jesus Christ cannot obey these biblical instructions. All such need to recognize the sinfulness of their own hearts, that they are full of sins like self love, hatred of others, prejudice, resentment, desire for vengeance, disobedience, self will, fornication, adultery, dishonesty, lying, deceit, hypocrisy and a host of other sins. Romans 1:29 describes the human race this way: "Being filled with all unrighteousness." Until a person stops pointing the finger at others who offend and realizes that he/she is the sinner for whom Christ died, there is no salvation and no new life in Christ. Friend, your problem is not the world, nor society, but your own heart.
My grandfather, a godly man who lived above racism in the South in the first half of the 20th Century, said to me, "Son, when God looks at people, He isn't looking at the color of their skin, but at the heart. And God says that our hearts are desperately wicked. What is wrong with the world is people need to be saved." He backed it up by the way he lived, and I never forgot it.
abuse carnal response cruelty hatred lives matter mistreatment prejudice social injustice