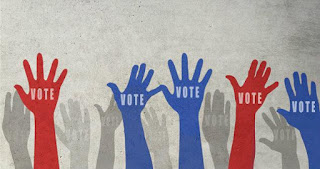 Recently UK politicians have been grappling with the decision as to whether there should be a second referendum, a ‘people’s vote’, regarding the recently negotiated Brexit deal between the UK and the other twenty-seven members of the EU. The UK Prime Minister and others argued strongly that the people had already spoken in 2016 and a majority had made it clearly known that they wanted to leave the EU. Such are the demands of democracy: the people must have their say!
In John 19.15 we read of a very serious choice that was made by the people who thronged the narrow streets around the Praetorium on the day the Lord Jesus was being tried by the Roman governor, Pontius Pilate. Convinced that the ‘prisoner’ before him was completely innocent of every charge made against Him, and therefore totally undeserving of punishment of any kind, let alone death, Pilate attempted to gain a favourable response from the baying mobs jostling in the streets below.
Firstly, he brought Him out wearing the crown of thorns cruelly woven by the heartless soldiers and His face etched with the evidence of the shockingly brutal maltreatment meted out to Him during the mock trials of the preceding hours. Pilate said, "Ecce homo!"; "Behold the man" John 19.5. Not a spark of sympathy could be ignited in their callous hearts. Then he attempted to present Jesus as their King but the unanimous answer of the assembled crowds was, "Away with Him, away with Him, crucify Him …" John 19.15. There was not a single dissenting voice as the people unhesitatingly recorded their vote. They could not tolerate the best, the kindest, the gentlest, the most compassionate Man that has ever lived on Planet Earth. As far as they were concerned, the sooner He was dead, the better. They hated Him with an intense but causeless hatred and their utter rejection of Him was stated in the clearest of terms. Of course, their attitude came as no surprise to the Saviour. In Psalm 69.20 these prophetic words were written, "… And I looked for some to take pity, but there was none; And for comforters but I found none." In but hours their wish was granted and the greatest travesty of justice was committed when this sinless, innocent Man, having been sentenced to death, was nailed to ‘that old, rugged cross’.
Beyond the frenzy and clamour of the crowds that day, with calm composure, the Lord Jesus submitted to the soldiers without a murmur and allowed them to drive the nails through His precious hands and feet. He knew that His death was absolutely necessary; His blood to which all the sacrifices of past centuries had pointed as the sole source of cleansing and pardon, must be shed. "Yes, a victim must be slain, else all hope of life is vain." "… without shedding of blood is no remission" Hebrews 9.22.
Alone, despised and rejected, the Son of God bore the dread penalty of our sins and paid the full price of our eternal redemption. Dear reader, He did all that God demanded to be done and He willingly did it all for you. Now the choice is yours: will you accept or reject this blessed Saviour? Your choice will have eternal consequences so think seriously lest you make the worst decision of your life. "He came unto His own, and His own received Him not. But as many as received Him, to them gave He power to become the sons [children] of God, even to them that believe on His name" John 1.11,12.

This article was printed in the Assembly Testimony magazine, and may be found online at their site, at the following address.
https://assemblytestimony.org/?q=node/576#great
Christ democracy faith gospel public opinion vote