IS POLITICS FOR CHRISTIANS? 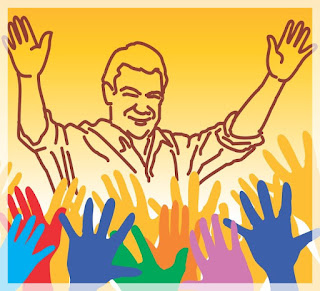 In John 7:3-4 Christ’s brethren gave Him their advice. “Depart hence, and go into Judaea, that thy disciples also may see the works that thou doest. For there is no man that doeth any thing in secret, and he himself seeketh to be known openly. If thou do these things, shew thyself to the world”. In other words, how do you expect to be hailed as Messiah unless the public knows you? It’s advice that every politician should follow. To win an election, one must show himself to the public. He needs the people’s vote, and to get that he must achieve popularity. “Show yourself to the world” – that is – launch a publicity campaign! Get your name and face out there. Put up posters and distribute flyers and buttons and signs with your photo. Do some photo ops for the press – be seen and photographed visiting schools, towns, factories, talking with the poor, the farmers, smiling, kissing babies, shaking hands – be “Mr. Friendly” or you’ll never win. Organize a support team to work tirelessly for your campaign – people who are willing to sacrifice time and energy (and money!) to help you win. And speaking of money, you’re going to need a huge amount of it, so get donations from everywhere possible, because in this supposed “democracy,” only those with lots of money can win. This is the way and wisdom of the world, and any Christian who enters politics has to follow it.
But it isn’t the way or wisdom of God. A believer doesn’t need to be voted for and elected, because God has already elected him, and that’s the election that counts! He elects to save all who believe the gospel! We have been chosen, not for a government position but “that we should be holy and without blame before him in love” (Eph. 1:4), and that we may be “conformed to the image of his Son” (Rom. 8:29).  By the grace of God we have already triumphed in the great election!
Note also that a believer cannot follow God’s will and win a political election, because the Lord Jesus Christ clearly laid out the path of all true Christians when He said,

Who Do You Think You Are?

Further along in John’s Gospel, when the Lord debated with the leaders of the Jews in Jerusalem, they asked Him, “Whom makest thou thyself?” (Jn. 8:53). Observe how Christ began His reply. “If I honour myself, my honour is nothing: it is my Father that honoureth me...” (v. 54). This is not only true regarding Christ, but is also applicable to every human being. Why should any person glorify or honor himself, or seek honor from a political party or a government? And yet, many do it! Such honor is nothing. It is vain and contemptible. This has many applications, but since we are considering politics, think how vain and worldly it is when a professing Christian seeks honor for himself, desiring recognition and acclaim, praise, and in this case, with the objective of obtaining votes. Like the Pharisees in Matthew 6, he behaves so as to be seen by men, and that is his reward (Matt. 6:5).
Remember, brethren, that the believer is not to seek glory or honor from men in this world. Instead, we bear the reproach of Christ (Heb. 13:13) and wait patiently. When Lord comes we will be seen with Him in glory. Before us is the “hope of the glory of God” (Rom. 5:2), not here but further along, not now but later. In 1 Corinthians 4 the apostle uses irony to reprove the Corinthians. “We are fools for Christ's sake, but ye are wise in Christ; we are weak, but ye are strong; ye are honourable, but we are despised” (1 Cor. 4:10). He would speak similarly today to those who desire to enter politics and seek positions in government – that is – seeking to be strong and honorable in the world.  The apostles were weak and despised, yet they achieved more for Christ than thousands who attempt to use politics and government. Those who do so are on the wrong road. How could anyone who enters politics sing this hymn of consecration penned by Judson Van de Venter, without being hypocritical?

“Even unto this present hour we both hunger, and thirst, and are naked, and are buffeted, and have no certain dwellingplace; And labour, working with our own hands: being reviled, we bless; being persecuted, we suffer it: Being defamed, we intreat: we are made as the filth of the world, and are the offscouring of all things unto this day” (1 Co. 4:11-13).

Who could possibly win an election living in that way! If he is “the filth of the world, and...the offscouring of all things,” he will surely fail!  Observe carefully what the apostle’s motive was in telling them these things. He wishes to warn them as beloved sons (v. 15).  In verse 16 he says, “Wherefore I beseeech you, be ye followers of me.” His inspired desire is that believers live with the same devotion and faithfulness as the apostles, even though they will suffer because of it. “We both hunger, and thirst, and are naked, and are buffeted, and have no certain dwellingplace...being reviled...being persecuted...being defamed...we are made as the filth of the world...the offscouring of all things...” That isn’t a formula for political success! Believers who follow Paul will suffer for their separation from the world, their love for Christ and their zeal in announcing the gospel. And yet, Paul would not have them avoid all that, but rather follow him and suffer for Christ’s sake! To imitate Paul would spell disaster for any politician, but we are called upon, implored by the mercies of God to present our bodies in living sacrifice, holy, pleasing to God (Rom. 12:1). This means saying goodbye forever to the world in all its forms, just as Moses forsook Egypt  (Heb. 11:27).  No brethren, for these and many other biblical reasons politics is not for believers. “It is your Father’s good pleasure to give you the kingdom” (Lk. 12:32), not the election. Therefore, “Let the dead bury their dead; but go thou and preach the kingdom of God” (Lk. 9:60).