Showing posts from May, 2012
Show all

The Ark of the LORD In Harvest-Time 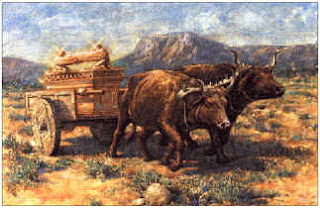 1 Samuel 6:13   “Now the people of Beth Shemesh were reaping their wheat harvest in the valley; and they lifted their eyes and saw the ark, and rejoiced to see it.”        Beth Shemesh was a city in the territory of the tribe of Judah (Joshua 15:10), about 14 miles to the west of the city of Jerusalem. It was originally a city given to Sun worship, but when conquered by Joshua it was given to the Levites (Joshua 21:16). Therefore its inhabitants were Levites, and they had a problem. Israel foolishly took the ark into battle as a good luck charm, and the Philistines captured it. For seven long months the ark of the LORD had been in the land of the Philistines, leaving Israel “Ichabod” (“the glory departed”), as a mark of divine displeasure. Surely among the godly minority in Israel, no one longed for the return of Jehovah’s ark more than the Levites. But since the armies of Israel had lost the ark in battle, what could a group of Levites possibly do to secure its return?
Read more
More posts